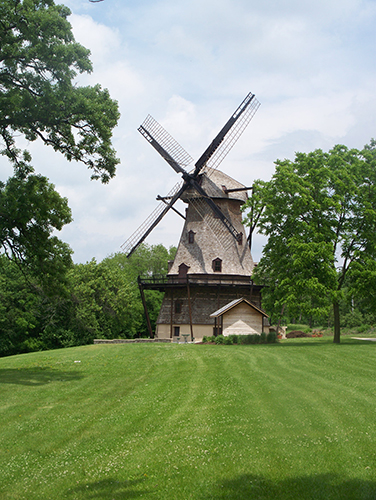 Fabyan Forest Preserve was once part of the large country estate of George and Nelle Fabyan. They came to the Fox River Valley in the early 1900s and bought a farmhouse and 10 acres on the west bank of the Fox River. Over the following 20 years, they acquired 300-plus acres and developed the property into a fabulous estate they called "Riverbank." After their deaths in 1936 and 1939, the Forest Preserve District of Kane County purchased the estate for this amazing preserve.

On the east side of Fabyan Forest Preserve, on Route 25, stands the majestic Fabyan Windmill. The 68-foot, 5-story structure was originally built by Louis Blackhaus, a German craftsman, between 1850 and 1860. The Windmill originally stood on a site in what is now Lombard, Illinois. In 1914, it was purchased by George Fabyan for about $8,000, and moved here to Riverbank.

After many years, the Windmill had fallen into disrepair. Third-generation Dutch Windmill Maker Lucas Verbij was contracted by the Forest Preserve District to tackle the tough job of restoring the Windmill. He was discovered by Preservation Partners of Fox Valley (the non-profit group that oversees care and provides tours of the historic preserve). Millwrights are difficult to find, along with the materials needed to restore such a unique structure.

According to Verbij, "The Fabyan Windmill is the best example of an authentic Dutch windmill in the United States. Actually, it's a treasure, and would be the most popular windmill in the Netherlands (we currently have 1,000 windmills). Restoring Fabyan Windmill was as much honor as it was duty. The timing of the restoration project was critical, as the main beams of the tower were strongly rotting. When you hardly have old original U.S. windmills left, preserving what you have is so important."

After years of planning and effort to restore the historic Fabyan Windmill to its original grandeur, including a trip to the Netherlands for authentic timber and gear work, the Windmill made its public debut in June 2005 with a Grand Reopening Celebration.

"There is German, Swedish and Dutch millwright work on this Windmill," states Verbij. "It is one of the few in the world that is restored to operate by natural wind energy."

Roman numeral markings carved into the beams used in original reconstruction are still visible. It took 33 workers mixing concrete by hand to build the foundation. The foundation is 42 inches deep and 26 inches thick. Inside the mill, the beams and shafts are of cypress wood and trimmed with black walnut. New wooden gears were made. At the top, or cap, of the mill is a huge cogged wheel turned by wind blowing against the vanes (blades). The vanes are covered with canvas sails to help catch the wind. The moving cog rotates a shaft running the height of the mill. You can also learn how the windmill operates by taking a tour, available on Sundays, starting the first Sunday in June through the first Sunday in October, from 1-4 p.m.

There once was a bakery in the basement, something rare for mills. The grinding mechanisms to make flour are restored, although the Fabyan Windmill no longer grinds.

Several honors have been accorded Fabyan Windmill. It is listed on the National Register of Historic Places, and it was also honored in 1980 by its selection to be on a US Postal stamp. This 15-cent stamp was part of a series of five American windmills included in a stamp booklet called WINDMILLS USA.

Volunteer millers train and run the mill. Volunteer tour guides or docents give tours. If you'd like become a Windmill volunteer, contact our Volunteer Coordinator at 630-208-8662 or email volunteer@kaneforest.com