Dick Young Forest Preserve comprises some of Kane County's finest wetlands, woodlands and prairie. Together, these create an ecological complex that supports a great diversity of animals and plants, including several threatened, rare and endangered species.

Whether walking, cycling, or riding horseback, visitors may see wildlife as diverse as pelicans and mink. Flora from pondweed to oak trees will please plant enthusiasts.

This preserve includes a horseback riding area. Most horse trails are natural surface, mowed grass paths. Limestone screenings trails and asphalt bike trails are available in some of the preserves. These are multi-use trails shared with runners, bicyclists, dog walkers etc. Horse riders are required to stay on designated, forest preserve-maintained trails. Trail riding is not allowed in restricted natural areas, Illinois Nature Preserves, picnic areas or in farmed areas. To prevent trail damage during wet weather, trails may be temporarily closed. Individual forest preserves will post a sign at the entrance when horse trails are closed. Trails are currently OPEN for equestrian use at this preserve. NOTE: Even while the other equestrian trails may be closed at this preserve, the limestone trail on the west side of the preserve, accessible from the Main Street entrance, will remain open, during preserve hours.
Preserve Map Horseback Riding Area 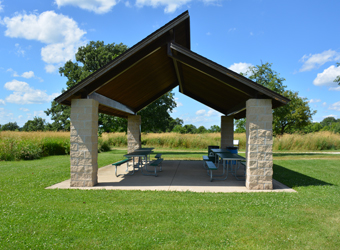 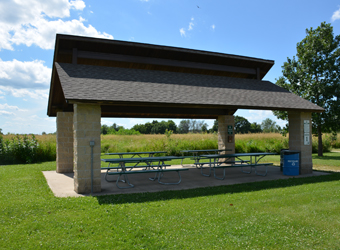 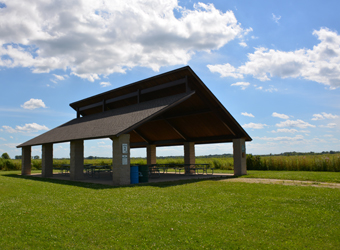 The geologic features of the site provide a window to the origins of the northern Illinois landscape. On the east side of the preserve is Nelson Lake Marsh, which lies in a depression created by the weight of glacial ice more than 10,000 years ago. A smaller prairie pothole, similarly formed, is evident near the north entrance to the preserve off Main Street. Moraines to the north and west of the marsh were created by the deposition of rocks, boulders and gravel from retreating glaciers.

Over time, several soil types formed in this vast and varied landscape. Soil and weather together influenced the development of wetland, woodland and prairie communities. A rich diversity of fauna evolved within these plant communities.

A century of agriculture and peat mining in the marsh diminished the habitat value of the area. Nelson Lake and its surrounding land were in danger of further decline when a small but dedicated group of individuals organized to preserve and restore the lake. This group, including the late naturalist Dick Young, spread the word among conservationists and the general public. With the support of this group, District teamed up with The Nature Conservancy in 1979 to purchase the core 178 acres of wetland and marsh. Restoration was soon underway, and volunteers organized trash pickup, conducted site monitoring, and removed invasive plants. To further protect the integrity of the natural area, the 154 acres within the Nelson Lake Marsh complex was dedicated as an Illinois Nature Preserve. Habitat restoration is an ongoing process here.

The District has added substantial acreage to the core of the preserve with funds made possible by several referendums and grants. This has provided unprecedented opportunities to restore the biological diversity of this area. Land management and restoration projects have brought back vegetation, absent for a century, nesting birds that have not bred here for decades, endangered species of reptiles and much more.

An Open Space Land Acquisition & Development (OSLAD) grant provided funding for improvements to the preserve including improved parking, two shelters, two restrooms, interpretive nodes and a wayfinding system. It also allowed for construction of bike, equestrian and walking trails throughout the preserve. Bicycling and equestrian use are limited to the western portion of the preserve.